Michael J. Hennessy of Darraghmore, Kilfinane, was called to his eternal reward in the early hours of Tuesday March 12th. As daylight hours dawned and the sad news filtered through, there was a quick realisation that he was now at peace having suffered a serious illness, which he bore with great dignity, for two and half years. We were all consoled on those difficult days that he had gone to a better place to be united with his wife Margaret, his parents and his brother Johnny.

Michael J. Was a product of the Ireland of the 40s and 50s an Ireland that was Christian, an Ireland where people looked out for their neighbours, an Ireland of modest and humble expectations. Those characteristics of the Ireland in which he grew up, shaped and informed his thinking, it inculcated into him an admirable set of values that he held dearly until he departed this life in the early hours of that Tuesday morning.

Mikey Joe as he was affectionately known by all of us who had come to cherish his endearing friendship was first of all a good family man, good husband and a good father and brother, a thoughtful and considerate neighbour, for many years a dedicated employee of A.I., Mitchelstown and above all a very much admired and valued member of the community.

Mikey Joe’s nationalistic instincts and love of all things Irish helped him gravitate towards the G.A.A, an organisation that he served with distinction as a player and club official. He was very central to compiling the history of Glenroe G.A.A. and his home and hospitality became the project headquarters. When he applied himself to a project, he was single minded, methodical, meticulous in attention to detail and obsessively inclusive, he constantly feared leaving anyone out. His research into the minutiae of a subject matter was incredible; it was all part of his quest for absolute perfection.

For some years, he took up umpiring with referees Jimmy Hickey and the late Seamus Murphy. For Mikey Joe that was life turning full circle as many times when he played goalkeeper for Glenroe, he very often did not see eye to eye with the men in the white coats at the goal post.

A lasting memorial to Mikey Joe of course is the Ballyhoura Bears Walking Club which he founded with his late brother Johnny and to which the brothers contributed enormously in establishing the club as one of the finest of its kind in the country. The club was a natural extension of Mikey Joe’s love for walking and the great outdoors. For 28 consecutive years he climbed Croagh Patrick and on one occasion about 7 years ago, he scaled the Mayo peak in the morning, climbed Maoi Ri in Connemara on the way home and went dancing that night. On another occasion he climbed Croagh Patrick in the morning and when he returned to base, he met somebody he knew starting out on the climb and he went back up with them.

Mikey Joe lived life to the full. He was totally unselfish when it came to giving of himself. He was dedicated to the upkeep of Darragh cemetery to which he volunteered long hours of his time. He was also a very devoted and valued member of Coshlea Historial Society and a lifelong dedicated member of a Pioneer Total Abstinence Association. He had a great love of dancing especially set dancing, these are just a snapshot of some of the other interests in the life and times of Mikey Joe Hennessy.

When Mikey Joe tool suddenly ill in July 2010, it was a great shock to his family and to all of us. However, there was comfort in the manner in which he bore his illness, with courage, dignity and fortitude. On many visits to him, he did not complain once as we shared many hours of reminiscing about old times and discussing the events of the day.

This brief appreciation is to salute an extraordinary life’s work. We thank God for the 75 years that Mikey Joe was in this world. We remember him for being first of all, a good son, a good and devoted husband to Margaret, a good father to Pat, Noreen, Josephine, Carmel and Mairèad, a good brother to his siblings, a good neighbour, a loyal and dedicated member of the community and a loyal and true friend.

We thank him for his example as a caring and considerate human being that he showed all through his life. Thank you Mikey Joe for your inspiration, thanks for enriching our lives with your endearing companionship and friendship.

We cannot stop the hands of time

Or live again in the past

Mikey Joe we will love and think of you

As long as time will last

Members of Ballyhoura Bears turned out in large numbers from the Limerick and North Cork areas, to join members if the Hennessy family and the local community. The threatening soft showers on the local hills did not impinge on the walkers. Tom McCarthy, a close friend of Mickey Joe and a long time fellow member of the Bears, led out the special walk from Darragh Bridge.

The walk proceeded via Boreen Dearg to Johnny's Seat. A brief stop at this viewing point highlighted the contribution of the Hennessy family to the development of walking in the Ballyhouras. As Tom led the walk back to Darragh, many stories were exchanged of Mickey Joe, and his brother Johnny's dedicated contribution to the walking fraternity. The development of the beautiful Darragh to Ballyorgan riverside walk is a testament to the foresight of Mickey Joe his brother Johnny, their fellow members and local landowners.

The evening light was fading as MC Pat Casey, Ardpatrick, welcomed fellow Bears, the Hennessy family and locals as they assembled around the limestone plaque carved by John Goggin, Kilfinane, and erected by the riverside on Darragh Bridge wall.

Deirdre Fitzpatrick unveiled the plaque and remembered Mickey Joe as an active, trim and fit man very suited to his three lifelong activities; playing hurling with Glenroe, walking and dancing. In concluding the proceedings, Pat Casey thanked the Daly family, and local landowners. He thanked all who helped in the planning and erection of the stone and arrangements on the evening. Refreshments were served at Daly's Pub, Darragh afterwards. 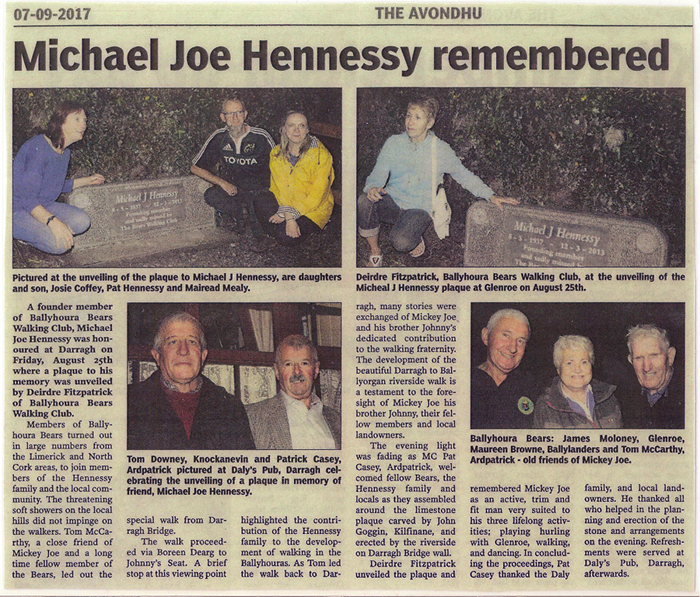